…and All The Odds Are In My Favour. Why We MUST Fix Gallery Events.

I write about art for a living, work as a curator, and have a BA in art history from Oxford. I’m white and able-bodied. The cards are very much stacked in my favour. I shouldn’t feel out of place at a private view, and yet…

Back in June, following the PV for Kate Dunn’s excellent show at T.J.Boulting, I put a poll up on Instagram: “Do you ever feel not cool* enough for the arts industry?*wealthy/glamourous/connected/etc.” 160 voted yes, 22 voted no. I had two messages afterwards saying they’d voted ‘no’ accidentally.

I explained in a second story post how I often leave a private view with a strange sinking feeling: “[These events] seem to be full of people who all know each other, are thin and fashionable, and move in wealthy art-buying circles”. I had a little cry on the train home.

My DMs were flooded with lovely messages in solidarity. Even the people that I feel intimidated by, who I think of as “properly belonging” to this world of secret events and networking, said they felt the same. The arts are often put down as “fake it til you make it” industries – there’s a lot of grinning and nodding and sucking up to people you find tiresome – so it’s no wonder that almost no one feels certain about their place in it.

Art galleries are notoriously unfriendly places where anyone who’s anyone knows everybody. Everyone speaks the same jargon, lives in the same postcodes, and wears the same designers. Despite often bumping into people I know at these events and being – at the very least – a bit qualified to talk about art, I still leave feeling disillusioned. Should I have gone to art school instead where my clique would have been pre-made? Do I want to work in an industry designed around exclusion? The art world is all about who’s in, who’s out, and who knows who. A lot of those whos are unbearable bores, egomaniacs, or snobs. I’m fed up with whos. 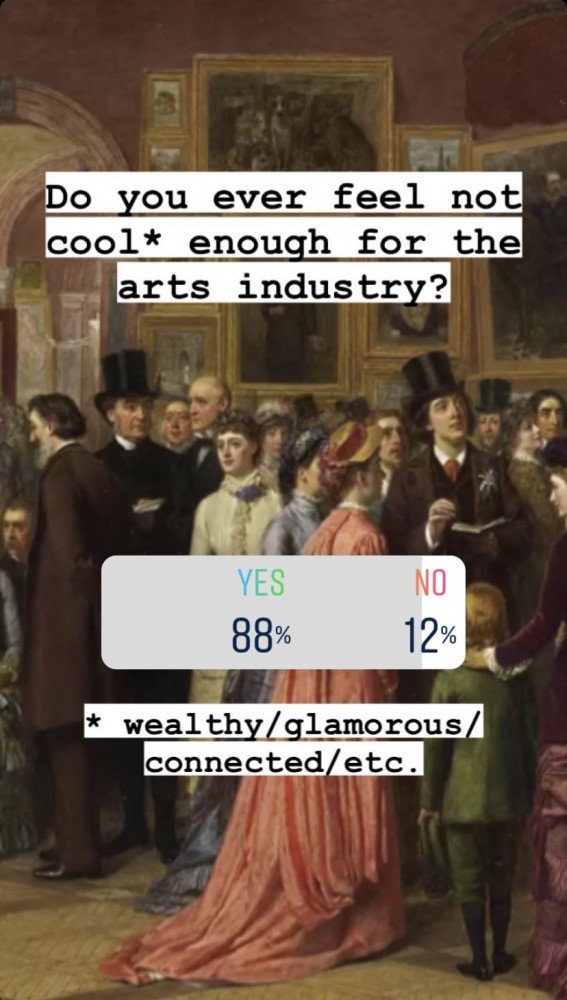 Feeling out of place is neither rare [see the poll] nor fleeting – so why is nothing being done to change the clearly failing set up? I suspect that for galleries, the people being failed by these events aren’t as high on the list of priorities as cash-flow is. A lot of the art world’s “problems” are only solvable from the top-down, and why should directors care if the art world has issues with accessibility, if the clientele that fund them aren’t affected? Expecting Mayfair galleries to change their ways and bring in fundamental change to how they run [including their invitations process, marketing, event planning and employees] isn’t likely.

My experience isn’t unique, but it’s also one of huge privilege. I can’t begin to imagine how unwelcoming these environments are for POC, Black, or disabled visitors. Even for people who’ve never stepped foot in a gallery before, for whom the language is entirely alien. Yes, maybe I feel out of place because I didn’t grow up or study in London, or because I went to a state school, or exist in a bigger body- but I’m not discriminated against.

When we think of accessibility we often simplify this down to physical access: “yes we’re accessible, we have a ramp and entry is free!” cry some of London’s most uninviting, intimidating galleries. “Access” can’t just mean access to the room. We need galleries in which every audience member has full access to the joys of the art or the event in front of them.

When we give more people enjoyable access to art [not just a dull school trip, or a disparaging visit to a contemporary art gallery where none of the labels make any sense], we breed more creativity. Art helps us to empathise, to emote, to problem-solve. Bringing access to art to more people can only be a good thing.

There are always going to be private views with private-private dinners held afterwards for those really in the inner circle. There are always going to be conservative gallery-going communities that embrace each other theatrically at the opening as if to announce “I belong here and so do you! Look everyone!”. What galleries must do is go above and beyond for providing events, talks and tours which bring in new audiences. If not, we run the risk of losing the emotional and educational value of fine art altogether. If the show you’ve curated is only interesting to people with a history of art MA – do better. If the only way people can enjoy your gallery event is if they know everyone else going – do better! It’s not enough to have an entrance fee under £5 and a version of your press release in larger font. Access isn’t a finishing flourish, it’s the foundation.

VERITY BABBS IS ONE OF OUR OG CONTRIBUTORS AT DARKLIGHT ART. WRITER, INDEPENDENT CURATOR AND ARTIST LIAISON FOR RISE ART; SHE HOSTS ‘ART LAUGHS’ ON YOUTUBE, INTERVIEWING THE UK’S RISING COMEDIC STARS ABOUT THEIR FAVOURITE WORKS OF ART. HER WRITTEN WORK FOCUSES ON LONDON’S CONTEMPORARY ART SCENE AND YOU CAN FOLLOW HER ON INSTAGRAM @VERITYBABBSART 50 YEARS OF WAYS OF SEEING The Importance of Female-Run Art Spaces